Showing posts with the label thriller
Show All

Reading journal: A Kill in the Morning by Graeme Shimmin 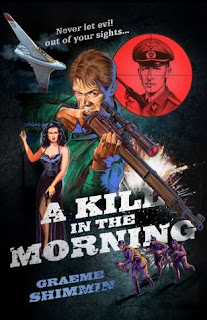 Genre: Science fiction/thriller/alternate history Published: 2014 Date read: April 2018 The story starts in 1955, with an assassination. OK, this is a cold war spy thriller. The German Reich still rules over Europe. Hmm. Not only a spy thriller, then, but an alternate time line. Flashbacks into the protagonist’s involvement in destroying a Norwegian heavy water plant. OK, also a WW2 war story. Later, a mysterious experiment involving an ultimate weapon, time travel. I give in! It’s science fiction as well. A great story told at tremendous pace. It’s mostly told in the first person and the present tense, something I usually find tedious, but Shimmin is a master. You really want the protagonists to succeed and every setback is terrible. The author said he was inspired by Robert Harris’s Fatherland but many other influences can be identified. However, this book is all Graeme Shimmin’s, and it’s a keeper. If you like thrillers spiced with flavours of other genres, this one is
Read more
More posts