Showing posts with the label historical fiction
Show All 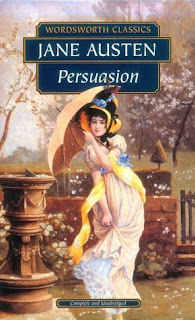 Genre: Romance Published: 1817 Read: February 2018 The novel follows a period in the life of Anne Elliot, a woman cursed with a vain, social climbing family. In her youth she refused an offer of marriage from Frederick Wentworth, a young sailor of no family or means. Now, years later, he has returned, wealthy from his exploits fighting in the British Navy in the Napoleonic Wars, to find her unmarried still. The novel explores the difficulties of navigating family and social pressures. Anne’s original rejection, seen by Frederick as due to weakness of character in letting family and friends persuade her against him, also had elements of immaturity and realistic prudence. He himself suffers from the expectations of family and friends, and forms a more mature judgement, leading to an unsurprising happily ever after, with a marriage based on love rather than family alliances. This novel is literary in style. Not much actually happens. Instead we see page after page of Anne’s pe
Location: Bath, UK
Read more
More posts