Showing posts with the label gold rush
Show All 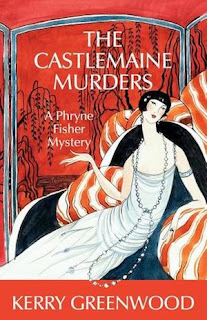 Genre: Crime Published: 2003 Series: Phryne Fisher Read: December 2017 In 1920s Australia, the gold rush days of the 1850s seem far in the past, but two mysteries from the Castlemaine goldfields come back to threaten amateur sleuth Phryne Fisher and her lover Lin Chung. Phryne’s mystery relates to a lost heir and a great inheritance. Lin Chung’s comes from a family feud, goldfield riots, and lost gold, and is far more interesting. There were riots at Castlemaine in 1854; many Chinese lives were saved through the bravery of Senior Constable Thomas Cooke, see memorial here. At Lambing Flat (now Young) in New South Wales, there were disgraceful riots and Chinese deaths in 1861, although many people were given refuge by a local landowner, James Roberts. There is an interesting recent essay about this by Gabrielle Chan, Race and the Golden Age [paywall, Meanjin magazine].   Threads of racism, and of courage in confronting it, continue in Australia today.
Location: Castlemaine VIC 3450, Australia
Read more
More posts