Showing posts with the label South Pole
Show All 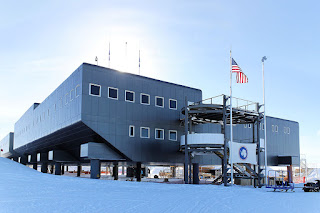 Antarctica — remote, covered in snow and ice, and one of the most isolated places on earth. I’m working on a story set in a future (circa 2058) South Pole base, involving a former feral street kid from Sydney turned janitor, a floor-cleaning robot possibly called Gloria, a hostile dome security manager, and an alien mining ship. The plot refuses to work, so instead I’ve turned to displacement activities such as research. It seems the remote and isolated tags aren’t as true as you might think, unless you’re unlucky enough to have a medical emergency during the winter and the weather prevents evacuation. The place is a hotbed of activity. I didn’t know, for example, that there actually is a base at the South Pole right now, the Amundsen-Scott base. Amundsen-Scott Base. By Daniel Leussler, CC BY-SA 3.0, https://commons.wikimedia.org/w/index.php?curid=31621072 Amundsen-Scott Base. By Bill Spindler, U.S. Antarctic Program, National Science Foundation - [1] by way of [2], Pu
Location: Antarctica
Read more
More posts