Showing posts with the label John Buchan
Show All 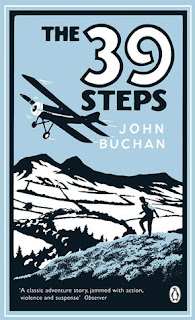 Genre: Thriller Published: 1915 Read: January 2018 I’ve read this many times. It’s still a very enjoyable story in spite of some dated prejudices against Germans, Jewish people and non-British foreigners. Richard Hannay, a mining engineer fresh from exploiting South Africa, returns to Britain in 1914, just before the start of the Great War. On the run from the police for a murder he didn’t commit, Hannay must foil a German spy plot and rediscover some kind of purpose in his life. Hannay is portrayed as a dimwit, and many of his choices are quite stupid, but his innate goodness and endurance let him triumph over his enemies. He is humble in a smug British way. It's slightly worrying that in later Richard Hannay stories he is promoted to the rank of general. A boys’ own adventure story, entirely lacking in women other than as suppliers of food, but utterly consistent in voice from start to finish, with plenty of pace and suspense. The book is much better t
Read more
More posts